Summary of our project findings and future development

Summaries of our sensors find there's a strong repeating pattern as I just mentioned every evening in winter as we turn our heating on. There are always localised events although there can be strong agreement which is reflected in the general weather or the pollution forecast. There's approximately one serious pollution event every 10 days or so. There's a 20 percent correlation between indoor and outdoor but one of the things that was striking for us was that indoor pollution increases going out of town and the highest readings of indoor pollution come from suburban areas of Belfast where there are more houses with more stoves and more open fires.

So what can we do about it? What action can you take?

What we realised working through this project that the hard problems are usually human problems they're not technical problems. Changing people's behaviour is just hard. It's difficult, look at the legislation that was introduced about smoking in the workplace, consider how long it took us to get there how many decades passed before public opinion had shifted. Just enough for the government to risk banning smoking. What is the likelihood of the government banning stoves or steadily taxing cars so that they cannot be a source of pollution. It just seems unrealistic so we really need to look at how we can change behaviour and recognise that it is difficult. Now there are roughly two articles a week in the national newspapers about pollution and its impact. The screenshots you see in front of you I took just last week. I didn't have to hunt very far and it's a selection of newspapers from across the uk and there are initiatives around the uk to promote this awareness but general anecdotal evidence is that they're underperforming.

So let's look at what we are trying to achieve and again these numbers are from Northern Ireland and for those of you living in England you just need to do the mental maths multiplied by 30.  What we want to do is provide personalised localised and real-time actionable advice. We want to create personal positive asthma action plans for up to 150,000 patients across Northern Ireland. We want to reduce the 10 thousand critical care admissions that happen every year and reduce those 70,000 bed days that are an impact caused by that lose 10,000 critical care admission. We want to reduce the 45 million spent on respiratory medicine each year. These are the targets, these are the goals and this is how we measure our success.

Whether or not we can impact these numbers we reason that the most likely people to engage with pollution and health services applications designed to change your behaviour and inform you but probably not the people that you that need the most help. For example an application that serves as the park run community or the Strava users who you would find a group of people that are very engaged with their health and they're very welcoming for more data for training and health guidance. Yes they're not necessarily the people that you need to but they can be a route to refining a service, building evidence so we can target more vulnerable groups. Ideally what we would like to do is reach people through their GP led care there's no reason why a service or an application like the one you can see in front of you, which is clean air for healthcare's mobile application, couldn't be prescribed by a GP.  But to reach the GPs you have to refine the service and you have to test it in the real world and you have to have a slick experience and clear evidence of its effectiveness.  So why not target the people that you can reach and use them to improve your application, improve your messaging, and improve personalised care. An example of this would be Couch to 5k. Which isn't for everyone but it is an example of a really successful self-help application that is promoted actively by the NHS and is recommended by the NHS. We are aware of various initiatives using existing pollution data infrastructure to deliver air quality alerts and as i mentioned before anecdotally it just doesn't appear to be a huge taker so we need to to work on that problem.

As I said behavioural change is hard and we are working with the University of Ulster on an ethical study to understand how people react to personalised pollution information. What are the ethical issues and how might they affect people's behaviour. It's an ongoing study so I really don't have results to discuss at this time. We're also having conversations with behaviour experts discussing how we might involve communities to target vulnerable groups could we, for example, provide real-time feedback in parks? can you put a sensor in your local park and information on the gate that might change behaviour.  How would it change behaviour? Could you encourage people to walk rather than run on a day with bad pollution? Could you remind people who do have long-term respiratory problems to take their inhaler before they walk the dog because they might, or maybe delay it until later, or another day?

Find out more about the Clean Air for Healthcare Data hub below and contact us for questions or enquiries: 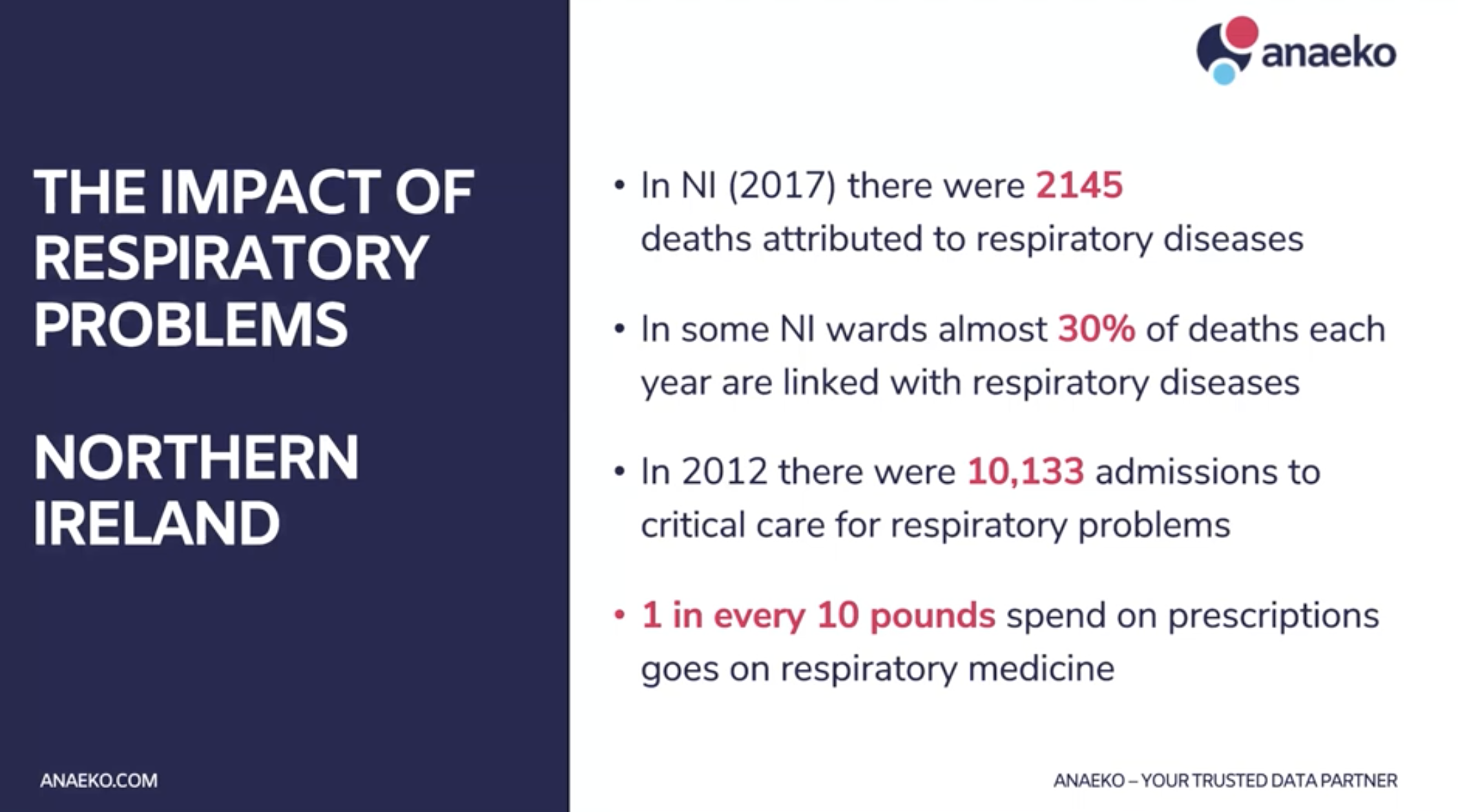 The Impact of Respiratory Problems 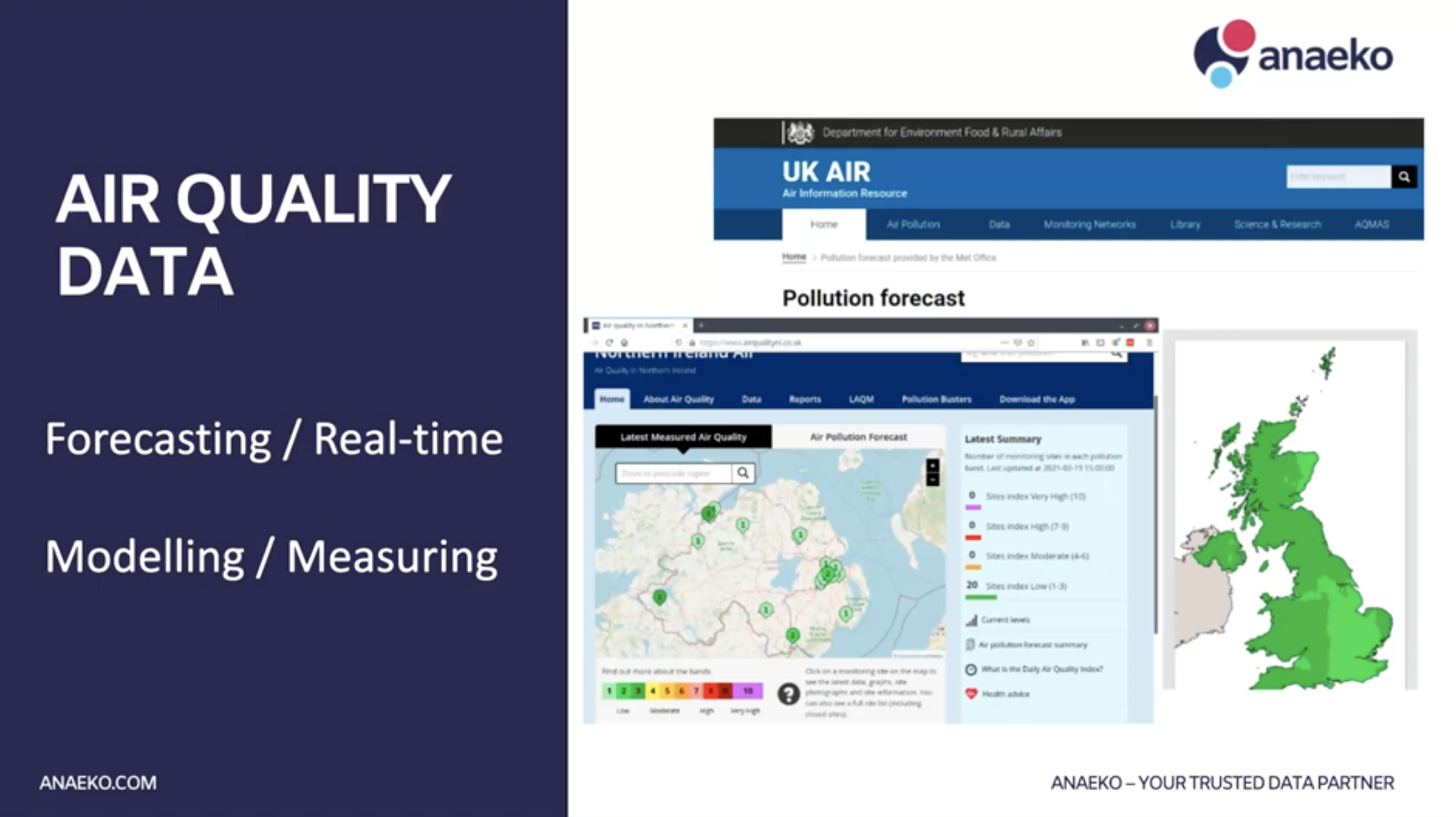